As a music composer for TV Commercials you have to first get inside the head of the client. This is true of any composing process. You need to understand the directors creative vision if you are to deliver a piece of music which elevates and enhances that vision. Beyond that you need to get under the skin of the brand and the identity they want to communicate to their target audience.

The visuals tell a story but so too does the music. The music is also critical in eliciting the desired emotional response from the viewer. And with the average person being exposed to an estimated 5,000 ads per day, music is becoming increasingly important way to make an ad stand out.

What is a Music Composer for TV Commercials?

A music composer for TV commercials is no different to a music composer for TV and Film. A director will have a creative vision and my job is to understand that vision. I then go away and let the creative juices flow and create several musical ideas which I think will complement and enhance their vision. TV ad makers are looking to engage their audience emotionally. If they can do that there is a greater chance that their product or brand will stay top of mind.

The ad and the music must work together in order to achieve this. A buzz word often is “synergy” and the synergy between visuals and music is incredibly powerful.  A great piece of music can elevate great visuals and vice versa.

This is a TV commercial which went out across the UK, Europe and Australia. It was a dream project as it is very rare to get commissioned to write and produce a 70’s funk track.

The first phase was producing three or four basic mockups to play to the client. Ideally from this they choose their favourite. If they aren’t right, it’s back to the drawing board. Luckily the music in this TV commercial was one of my first ideas.

Now I could have used sampled drums and brass, but funk, like most music lives and dies by the performance. The performance is probably the most critical 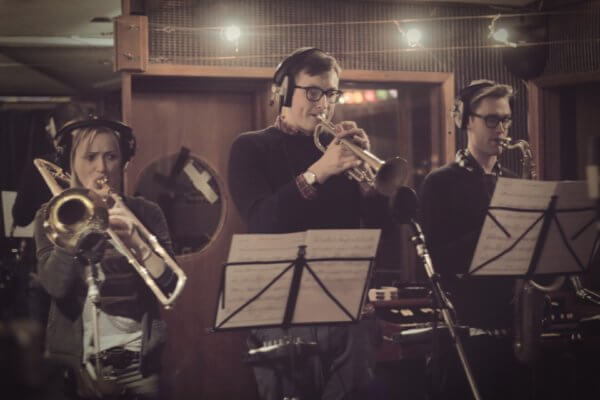 factor in creating a piece of music that engages someone emotionally. So I went into the studio with a drummer and a bass player to record the rhythm section. This was then the foundation on which I built the rest of the track. In the same studio session we recorded the brass section. Then it was back to my own studio to do guitar and percussion

The Drums, bass and brass were recorded at The Square in Hoxton, London. Unfortunately it was the last session recorded there. The studio fell victim to gentrification and extortionate rent hikes. The guitar recording and mix was done at Larp Music Studios north London.

A big thanks to the musicians: