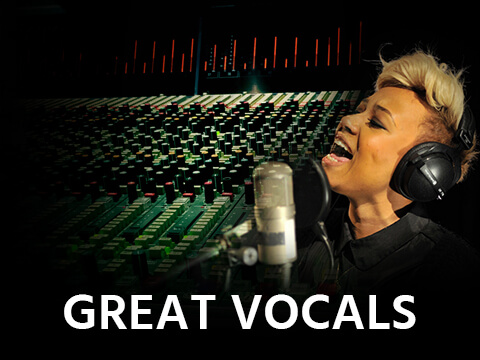 How to Record Great Vocals – 5 Tips

Record Great Vocals – no matter what music you produce, at some point you will need to record vocals.

Vocals are usually front and foremost in any song so getting a good recording is critical. In this music production tutorial I discuss what I think are the five key things to consider when recording vocals.

Microphone Type (I’m using a Neuman TLM-103). Whilst you don’t need an amazing microphone to record a great vocal performance, different mics will impart different characteristics on a voice. However I’m convinced (although never tested) that I could hear the difference between an entry level mic and a more pro mic. But the fact remains that as with any recording, the quality of the performance is the critical factor. The best mic in the world won’t make a shit performance good.

Plosives – This is the sudden rush of wind created by saying Ps and Bs. Get yourself a pop shield

Singer Position – You need to think about where you want your singer to stand in relation to the microphone. Do you want an intimate vocal recording? Are you singing backing vocals?

Singer State of Mind – This is maybe the most important part as singers can be delicate flowers. Again this goes back to vocal performance. The singer needs to feel comfortable and confident and it is your role as a music producer to make that happen.

Filmic Folk 2 – Have a listen…