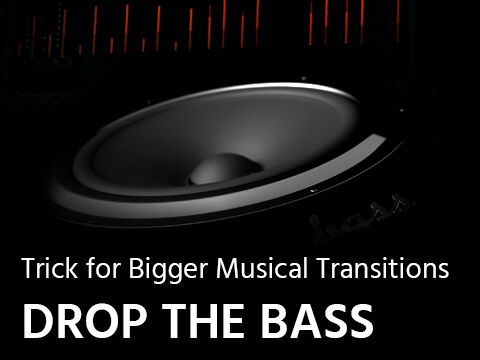 When producing music, the default approach to adding impact, is to add more sounds. This generally holds true. Your chorus will generally have more instrumentation for greater impact but there are many ways to add impact. For example, rather counter intuitively, taking instruments out can be a great way to provide contrast and add drama. For example drop the bass.

As a music producer or mix engineer your job is to create contrast. Take the example of a bathroom extractor fan. If it runs for 15 minutes you don’t notice it it… until it stops. Similarly you notice it when it comes on but after a few minutes you stop noticing it. The same is true of an instrument in a mix. If you take it out, even for a few seconds, you notice it when it comes back in. If it’s constantly there, it provides no contrast. Hopefully the video demonstrates the effect

When I say drop the bass I’m talking about removing the bass, or indeed any other instrument, just before a you transition to a new musical section. You create a sense of anticipation and make the change more powerful.

In my post about reductive automation in Logic, I talk about creating space in order to provide build and drama.

If bass is your thing have a look at my post on Moving Kick Drums which helps you get the most bang for your buck when programming kicks – it’s aimed more at electronic music production.

The Week The Landlords Moved In