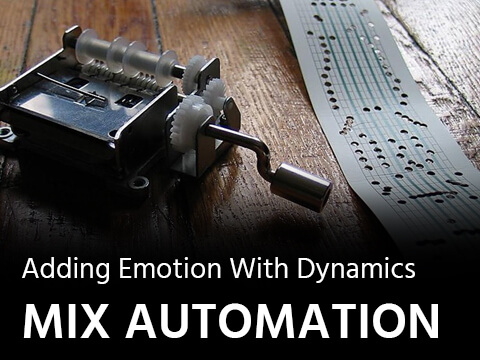 Mix Automation is an important part of the music making process for any music producer of mix engineer. In this music production tutorial I show you some examples of automation that I used in a previous project.

What is Mix Automation?

Mix automation is essentially the process of automation changes in volume, panning effects sends etc.. This allows you to create movement, drama and energy in any given piece of music. For example, you will often find that the vocals in a track will increase in volume on each chorus. This gives a natural build throughout the track. Certain instruments may increase in volume just before the chorus adding heightened drama. The signal sent to a reverb or a delay may also increase on the chorus to provide contrast between the verse and the chorus.

I always talk about taking the listener on a journey and mix automation is a powerful tool in doing this. It’s also worth mentioning that this is usually one of the final parts of the mix process. Icing on the cake if you will.

Whilst I show you how to automate in Logic Pro X although the principles of automation are the same irrespective of your DAW.

Jim Hustwit is a London based Music Producer and Composer