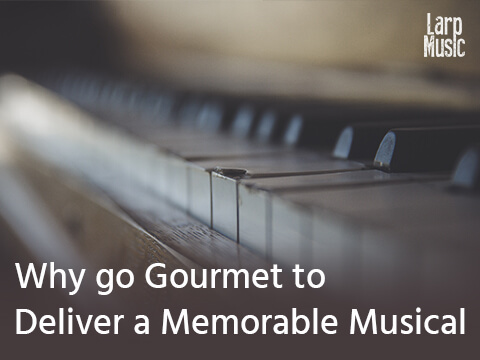 Why Filmmakers Must Go Gourmet to Deliver a Memorable Musical Experience

Understandably, film production companies are often restricted by time and budget, so opt for library (or production) music rather than composed.

And when time is short, handpicking the finished article from a database is often more effective than getting a composer to write and produce a cue in a day (or less.)

But for a filmmaker pouring their heart and soul into crafting a film, nothing but a highly considered and tailored score will do.

Plus, there is only so much an editor can do within the limitations created by using pre-produced music.

“Stock music is to film what a ready meal is to cuisine.  It serves a purpose but doesn’t provide a memorable experience.”

Imagine you’re fitting a kitchen. First, you measure the room. Then you design the kitchen. You don’t build a kitchen and then plonk it in the room, hoping it fits.

Your film deserves a bespoke kitchen.

This rings true for both narrative and factual films.

Whilst you’ll be hard-pressed to find an award-winning documentary that doesn’t have composed music, I do accept that the general restraints of commissioned films mean that production music may make more sense. However, I don’t believe that is the case for the title sequence.

(I talk about this in my previous post: The Top Five TV Title Sequences).

The music and the visuals need to be working hard and together to get the viewers’ attention. A bespoke piece of composed music should be at the core.

Music is often overlooked is because it’s a subconscious element.

The visual element is the guiding factor, but music is critical to adding pace and emotion to a film and without it, a film suffers.

If you choose production music for your film, you’re limited by the structure, emotion, motif and theme. Go gourmet, and you’ll be crafting a musical experience that complements and elevates the visual delivery.

To discover more, listen to some recent ‘gourmet’ compositions in my portfolio.